I'll be at the Moves '09 film festival in Manchester (24 - 27th April) for my screening with Comma Film and artists talk for the 'Dance for Camera nights' event where we'll be discussing the role of narrative in artists film. Details below:
CARTE BLANCHE: COMMA FILM
This Friday (24th), 9pm. Cervantes Institute. Free.
A late-night showcase of 12 films produced as part of the on-going Comma Film project - adaptations of award-winning poems and short stories published independently in the region, featuring poems and stories by John Cooper Clarke, Hanif Kureishi, David Constantine, Shamshad Khan, Kath McKay and many others. Directors include Terry Wragg, Gwendolen Osmond (film pictured), Ronald Wright, Caleb Shaffer, Charlotte Caetano, James Fisher, Sarah Eyre, Kate Jessop and Lisa Risbec. Accompanied by a live reading by Gaia Holmes plus q&a with the filmmakers. 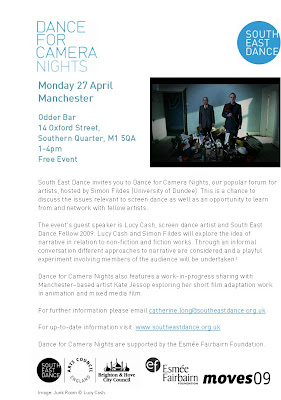 Join us for our popular forum for artists, hosted by Simon Fildes (University of Dundee). This is a chance to discuss the issues relevant to screen dance as well as an opportunity to learn from and network with fellow artists.

The events guest speaker is Lucy Cash, screen dance artist and South East Dance Fellow 2009. Lucy Cash and Simon Fildes will explore the idea of narrative in relation to non-fiction and fiction works. Through an informal conversation different approaches to narrative are considered and a playful experiment into instant narrative will be undertaken!